Throughout this article, we are going to explore some of the most successful Christmas adverts of all time. And, what made them such a roaring success.

One of the most successful Christmas adverts of all time was the Sainsburys 1914 advert.

It is set during World War 1 in 1914 on Christmas Day. The scenes commence with visuals of the British and German soldiers between trenches. Emotions rising as they receive gifts from home, while Christmas day is quickly approaching.

Then, we experience the day arrive. From here, the audience is subject to find the soldiers on the Front Line forging a truce, by performing an unofficial ceasefire where a game of football is played.

The soldiers chatted and socialised with one another, taking part in exchanges that seem to be only dreamt of during a time like the First World War, in order to celebrate the festive season. An emotional roller coaster for sure. But, one that made a huge impact on those watching while in the warmth of their safe sanctuaries called home.

100 Years since the truce, 2014 was the best time for Sainsbury’s to release its advert about this iconic day; in partnership with The Royal British Legion. The profits made from the sale of chocolate bars in Sainsbury’s stores went to the charity; providing support for veterans of the British Armed Forces and their families following the release of the advert.

John Lewis “The Man On The Moon” advert release in 2015 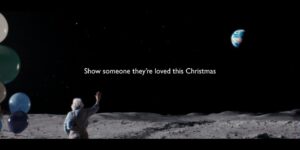 Another successful Christmas advert is the John Lewis “The Man On The Moon” advert released in 2015.

The advert shows a young girl drawn in by intrigue to a possible sighting on the moon. With her telescope in hand and window open, she works hard to focus. Then finally, she sees a man!

The story continues to show the build-up of a friendly connection between an elderly man living in loneliness on the moon, and the young girl. With an ending that caused floods of tears for everyone.

With endless attempts to send a gift to the lonely elderly, the girl finally succeeds, and we witness the man to receive a gift on Christmas day. A telescope, to see that he has a friend, and heart wrenching emotions are expressed on screen.

This advert tugs on the heartstrings of the audience. Being made specifically to raise the saddening awareness that nearly 1 million older people in the country experience loneliness. Getting this advert right was massively important to John Lewis.

This is because the issue at hand is actively happening up and down the country. Yet it is a problem quietly hiding behind the shadows. The advert was successful in making clear that it is of great importance that everyone is cared for, especially on Christmas day.

John Lewis ‘Man On The Moon’ 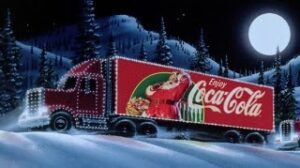 A truly successful Christmas advert was the Coca-Cola “Holidays Are Coming” advert first released in 1995.

The advert shows a young boy ringing a bell to signal that the Coca-Cola Christmas truck is on its way to make an appearance through the town centre. Excitement bursts as it travels through the snow-covered lanes. With each light twinkling just perfectly between the trees so passers-by can capture a quick glance of the astonishingly dressed vehicle.

This was, in fact, exactly what happened for a child and his father. Pulling up just at the right time to watch as the flying lights passed by. Then all ending with a polite salute from the big man himself, Santa.

This advert has been featuring on our screens for nearly 20 years and truly is the sign that the festive season has begun. In fact, Coca-Cola has quickly become the face on Christmas. With people everywhere taking time from their evenings to visit the star feature that is the bus and soak up all the holiday excitement that the advert would bring, only now in real life.

Why Are These Christmas Adverts So Successful?

The three Christmas adverts mentioned above, we can all agree, are extremely successful. But, the real question is, why did this form of video marketing make them such a success?

We all know that emotional marketing is successful in pushing your brand and advertising above the competition. And, this is exactly one of the reasons why these adverts were so successful.

Emotional marketing tells a story that connects audiences with companies and brands in a personal and direct way. When done correctly emotional marketing strategies help companies to differentiate themselves in a very challenging and competitive environment. With consumers increasingly making buying decisions driven by emotions and feelings rather than logical thinking, emotional marketing is more successful than ever.

Both the Sainsburys ‘1914’ and John Lewis ‘The Man On The Moon’ adverts used emotional marketing in the same way. This was to make their adverts successful and stand above the competition. These two adverts tug on the heartstrings of viewers. Highlighting that Christmas isn’t always about big extravagant gifts; it’s about caring for others as well as uniting and coming together.

Not to mention, addressing a particular theme such as elderly loneliness. Sadly this is a subject that many pushes to the back of their minds. Bringing these forward will be sure to make a company stand out. By being impactful with their clear confidence to speak about things metaphorically, that others would rather not.

There is actually a range of different emotions that a Christmas advert can choose to evoke within the audience. We may stereotypically believe these are labelled as ‘happiness’, ‘sadness’ or ‘love’, yet it becomes far more contextual than just that.

This style of emotional marketing takes place in the adverts that address any form of anniversary or milestone approaching. By creating the advert based on changes through time, can emit the feeling of sentimentality between in the audience.

This works best with brands that have been standing with a reputable name for a long time. Like John Lewis’s and Coca-Colas, these have had following through the years. So, an advert showing their personal progression will make an impact on those who can relate to the growth.

By taking the approach of an aspirational angle, viewers can experience an advert that will show them things they may want to achieve in life.

From fancy cars to huge homes, many people would love to have these luxuries. So, producing an advert in this style just before the end of the year will allow viewers to set up their our targets, and get to reach the standard of the richest.

Within these adverts, we see companies try to show their human side. They try to craft an advert to show a caring and thoughtful side of the business. One that finds this more important than just profit.

It’s all about making a relationship with the brand in these adverts, and seeing them more than just a local store or corporate chain that only wants service; as this is usually not the case.

This style of the advert is created to aid those who may be shy, or too afraid to overcome their fears. Within these, inspiration can come from anywhere. From the ability to overcome the hardships of school and adversity, or finally take on those who create challenges every day.

Depending on what the company wants to portray, will determine the route they take. However, it will always have a sense of the main character finally completing a long-awaited challenge. And with the viewers cheering, they will surely be inspired to do the same.

Likewise, with many homes up and down the country, the Christmas season doesn’t commence until the biggest named companies release their long-awaited adverts.

From cans of Coca-Cola to a heart-wrenching friendship; there is no say in what direction the adverts will go. But it is certain each one will bring a new impactful meaning or a hearty amount of entertainment to every household.

It’s not only these three companies that tackle the adverts, however. We have shared a love story between two carrots with Aldi, and the lonely start of a school hedgehog, finally making some friends with Erste, spiralling emotions around many.

Furthermore, the adverts produced have to be created with a lot of thought. In order to achieve the right emotions evoked by the audience, the producers would have to decipher which route they are going to take when scripting. There is so much that needs to be considered.

With technology constantly developing, it has been easier than ever to extract data from past years and gain an insight into what will be successful in the future. As well as the editing process, animation is becoming more and more realistic through the use of artificial intelligence and highly technical graphics workstations. And this is all to ensure a perfectly crafted and edited advert is made that will only hit success with its views.

With these examples in mind, just proves that there is no guideline to a Christmas advert. And, anything is accepted to finally satisfy the excitement that has built up over the winter period!

So, do you have a favourite Christmas advert?