My wife and I have recently signed the papers for our first property. We had been living together for quite a while but in my parents’ house, as they had another place. It was the house I grew up and my wife had never moved out until she moved in with me so we never really had much work to do. That all changed when me moved into our new, empty house of course.

We had no idea of the amount of work that goes into getting a place up and running. Something as simple as dodgy water appliances led to people being called and maintenance work having to be carried out. Who knew that water could be such a pain? Here’s what needed to be done;

Washing Machine
The first thing we needed to do was to call in a plumber friend to install the washing machine. It’s crazy to think that something so simple has never even crossed my mind. I’m quite lucky in the respect that I have never had to deal with anything like that before. It was best to call someone in otherwise I would have probably flooded the whole ground floor of the place. 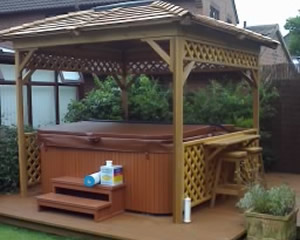 Shower
Our jobs mean we have busy lifestyles, so my wife and I rarely have time for baths. It’s nice to have a bath every now and again be we are most definitely shower people. We both had time booked off of work so that we had chance to get everything up to scratch, so one of the first things on my list was to have a shower installed. But now this has extended to having a home water softener system installed to keep all our water appliances from clogging up with limescale and to save money on products such as washing powder and shampoo. Is this a set too far? Here goes the hard water vs soft water debate.

Hot Tub
My parents have gone all out again and bought us a hot tub for a house-warming present. I was grateful for the gift but felt a little overwhelmed. We would have been quite happy with an iron or an Argos voucher. We called somebody in to install it, but now we have to be thinking about hot tub servicing and repairs if it breaks down. Luckily for me I have a friend who works for UK Hot Tubs.

As you can see there were a few walls that we ran into whilst moving in and that was just with the water based things. Don’t get me started on the gas and electric work that needed doing. Good job I have a lot of contacts I suppose!